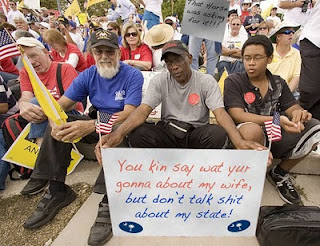 William Moultrie reports on a counter demonstration at the diSCust.com:

...
The Rally to Preemptively Restore Honor to South Carolina will be held on the same day as the Stewart/Colbert rally, October 30, but due to National Park Service rules about overlapping events, the South Carolina rally will begin at 4 a.m.
“We’ll be all be meeting at the corner of South Carolina Ave. and Independence Ave. and carpooling to the Lincoln Memorial,” said U.S. Senate Candidate Alvin Greene, who was asked to publicize and organize the event because of his proven method of  frugal yet effective campaigning. “We picked that location for symbolic reasons, but unfortunately we didn’t realize how far it would be to walk from there to the mall, so please call me if you’re planning on driving and you have a bus or minivan.”